Once limited to major world cities, today’s interest in playgrounds has no precedent.

As a product of the Industrial Revolution, the playground and relaxation movement of the early 1900s was largely urban based, but the current movement is nationwide and includes urban and rural areas, public parks, squares, public and private schools, child development centers, backyards, and fast food restaurants. Increased interest has also expanded opportunities in indoor pay-for-play centers, theme parks, zoos, and children’s museums. The development of national safety guidelines and standards, began during the mid-1970s; the standards are now influencing–indeed directing–thought and action in playground planning, development and use.

Although attention to playground safety is long overdue, the uninformed and overzealous application of safety standards may be as harmful as inattention to safety. Too often developmentally inappropriate playgrounds, paranoia about children’s safety, injury litigation, and physical destruction of playgrounds can be the result. The very welcome interest in playground safety can be tempered and illuminated with a focus on the child.

The importance of play in childhood development is widely misunderstood among the general population. Most adults view play as frivolous and unimportant. Fortunately for children, a growing number of sponsors are developing state-of-the-art play environments that challenge creativity while remaining relatively safe. We can plan innovative, developmentally appropriate playgrounds by examining the importance of play in child development, the influences of cultural change on children’s play and child development and age influences.

Importance of Play in Child Development

Perhaps the most pressing need in planning play environments is understanding the nature of play and its importance in children’s cognitive, social, language, and motor development. There is a rapidly growing body of evidence that play is central–indeed critical–to childhood development. Biologists and psychologists agree that play influences development; here is what they have to say. Research on play by biologists, psychiatrists, primatologists, psychologists, psycho-biologists, evolutionary biologists, educators, and anthropologists, conclude that play isn’t just fun. Young mammals can’t do without it. For a variety of species, including humans, play is “nearly as important as food and sleep.” Through play, particularly make-believe or imaginative play, children gain emotional and mental mastery, and lay the groundwork for creative thinking. Play is serious business. 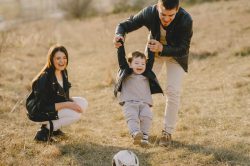 Play promotes cognitive development. Play leads to discovery, reasoning, manipulative skills, divergent production and improves problem solving. All sorts of learning, about information, about people (including self), and about customs, are embedded in play. Biologists who study play conclude that “play is a vital activity that helps the brains of young animals develop,” and through play “children practice many of the skills they will need as adults.” Further, “the intense sensory and physical stimulation that comes with playing is critical to the growth of …cerebellar synapses…” This is supported by brain scans of Romanian orphans which show that deprivation of play and human interaction result in biological regression of brain development. The experiences of childhood, especially play, help form the brain’s circuits. If neurons are not used they may die.

“Zap: neurons in the brain’s amygdala send pulses of electricity through the circuits that control emotion. You hold him (infant) on your lap and talk…and neurons from his ears start hardwiring connections to the auditory cortex. And you thought you were just playing with your kid.”

Play promotes social development and motor development. Play provides opportunities to learn social roles and rules as well as a socially shared system of symbols, including language. Not only is play associated with the development of specific motor skills but biologists conclude that “the vigorous movements of play help in the maturation of muscle tissue ….”

Play promotes physical fitness and health. Sedentary lifestyles and junk food–coupled with reduction of physical education, play and work–are resulting in a nation of flabby, short-winded kids with elevated cholesterol and blood pressure levels and declining strength and heart-lung endurance.

Play is therapeutic. The therapeutic benefits of play are pronounced during play, especially make believe or symbolic play. The young child’s play is equivalent to the adult’s language in expressing self and resolving conflicts. A growing body of research, reviewed by Landreth concludes that playing helps children to resolve conflicts resulting from child abuse, family disruptions and other trauma.